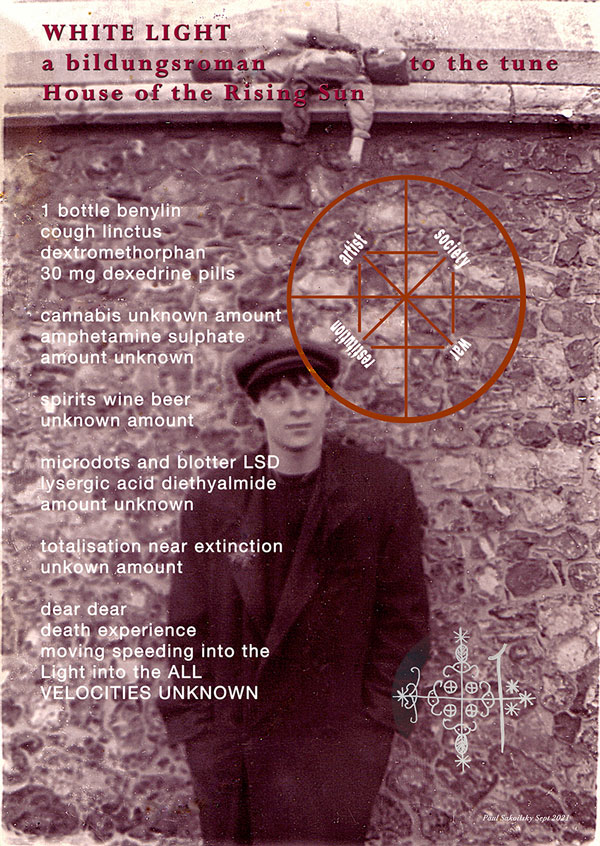 The work is part of an aesthetic-ritual practise I recently decided to take up as an experiment that I call ‘agnostic voodoo’. A 1st public performance of this took place recently at the Hoxton Gallery .

It is a constellation of 4 works from the photo of a 17 year old me (taken by artist Donald Brown) in 1981, to the Papa Legba sigil, I drew yesterday. The schema: artist/society/war/restitution, was originally a print called ‘Society, A Preliminary Sketch ‘in 2008. The ideas behind it finally found full philosophical expression in a lecture-performance in a festival of ‘anarchic art and culture’ at L’Asilo, Napoli in 2018. I once said to a therapist I was seeing that I wasn’t going to speak about politics today, and she just laughed. For me, at its most basic level “everything is politics, everything is art”, everything that exists in the world, for good or bad, has been touched by humans, and as the saying goes, 2’s company, 3’s a crowd, as in a dramatic triangle, one already has the basis/necessity of politics. The poem was first shown and performed (accompanied by my son Joseph) at “THIS IS THE GATE OF HEAVEN’ in 2018 at Gallery 46 (London) a wonderful exhibition Paul Renner and I collaborated on. It describes a real event that happened not long before the photo was taken.

The work is a therapeutic, a psychonautical circle, a momento mori, personal/collectivist, and a crossroads, as is life itself.
London 25/08/2020

© Copyright 2021 by KÜNSTLERSTATEMENTS / Johanna van Emden and the represented artists