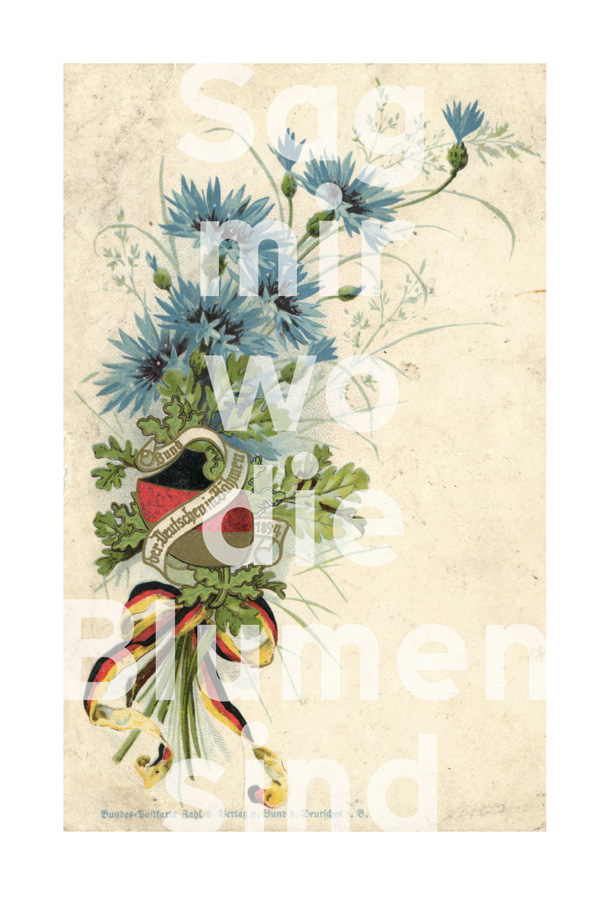 The core of Miroslav Hašek’s work is a period postcard, which can be understood on a more general level as an intimate social artifact, which in this case can be seen as an elementary point for unfolding the levels of possible ways of interpretation. In truth, it is a historical interpretation, touching on specific historical moments, viewed from a different point of view, making visible the facts and details that were or could have been pushed into the background at the given time.
Miroslav Hašek’s poster confronts a color-printed historical postcard, which depicts a bouquet consisting of a sprig of cornflowers and oak branches tied with the German tricolor with a text that plays with ambiguous overlaps of meaning. The text on the poster refers to a song with a significant anti-war undertone, interpreted by the famous German „superstar“ Marlene Dietrich (Sag mir wo die Blumen sind), but also touches on Czech-German relations and reciprocity, while using contemporary art strategies and their archival materials.
The poster refers to Miroslav Hašek’s installation from 2016 of the same name, which compares an idealized, romanticizing and ideologically relevant motif on a postcard with the residue of a real bouquet formed by dried torsos of natural objects, arranged with a ribbon. The bouquet is withered, covered with a glass lid and all the more reminiscent of a „relic“ – a sacred memory of something important, essential and historically significant. Viewers will be able to visit the entire installation in 2021 at the Bilinale art festival (Bilina, CZ). The festival will be curated by artist Susan Donath.
In the case of the Künstlerstatements project, where the format of the postcard is enlarged to the size of a poster and then displayed in a public space / gallery, the work contrasts with the space with its intimacy, delicate poetics and universal – yet still very personal – lyrical message. The message, perhaps a greeting, is however not clearly readable – it is rather conjectured, which leaves room for the viewer’s imagination.
The literal rewriting of a metaphor, symbol or established habit or stereotype is characteristic of Miroslav Hašek’s work. With similar obviousness and bias he draws from his own family or local history (North Bohemian Sudetenland area). Another significant element of his work is a sensitive approach to the materials from which he constructs his work and which are very variable (glass, porcelain, textiles, photographic images or video installations).

© Copyright 2021 by KÜNSTLERSTATEMENTS / Johanna van Emden and the represented artists